When the plaque layer is not cleaned at an early stage, then it forms a thick dark layer called tartar. Tartar causes different dental health issues like the decay of the tooth, gum receding, Gingivitis, bad breath, gum bleeding, etc. Tartar cannot be removed by simple natural methods. Visiting the dental experts for tartar removal treatment is the proper way to get rid of tartar.

The accumulated plaque and minerals from the saliva that hardens are known as tartar or calculus. Tartar is like the crusty blanket on the teeth. It is the hardened version of plaque. It coats the exterior of the teeth which can invade the gum line below.

Food and drinks can easily stain tartar as it is porous in nature. Plaque crawls between the teeth and between the gum line and the teeth, it makes it more difficult to get rid of it. Tartar creates a strong bond with teeth and it can only be removed by a tartar removal dentist.

The formation of tartar also makes it difficult to remove plaque and bacterias from the teeth. The amount of tartar build-up may vary from individual to individual. But for many of them, it is an age-related factor.

Effects of tartar and plaque:

How to prevent tartar from plaque? 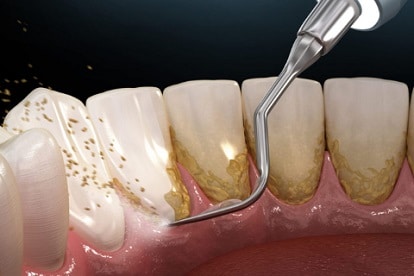 How often to have tartar removed? 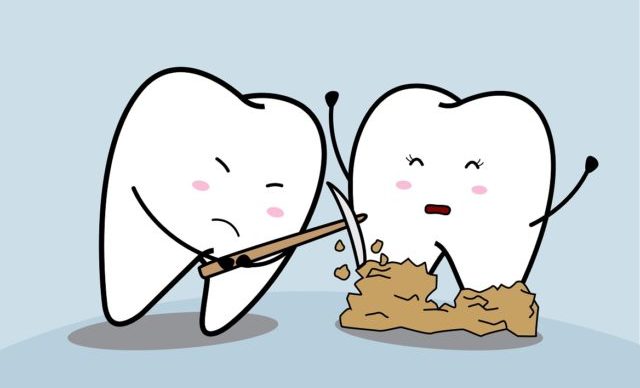 It is important to remove tartar periodically. Traditional dentist, as well as the dentist who not only look after the oral hygiene but also the overall health, can remove tartar.

The tartar removal dentist will remove the tartar with the help of a hand-held metal device that has a hook-like end and scrapes the tartar. In case of excessive damage caused because of the tartar, root planning or deep cleaning that involves scaling is recommended.

Removal of plaque and tartar is done on both above and below the gum line. During the process of tartar removal, roots of teeth are smoothed so that it helps in the reattachment of the gum to the tooth. In the case where the bacteria are in the pocket, then the laser is used to kill the bacteria.

How does tartar impact your gums?

In later stages, gingivitis can lead to an irreversible disease known as periodontitis. Periodontitis is one of the major reasons for tooth loss in India. In periodontitis, there is a development of pocket between the teeth and the gum line because the gums are being pulled away from the teeth.

In addition to the above symptoms, the following signs would be seen in patients with periodontitis:

In extreme conditions, if the bacteria’s of periodontitis enter the bloodstream, then it may cause heart and lung disease. It becomes necessary to keep a check of the above-mentioned dental problems because I can lead to adverse effects. In order to avoid such conditions, it is important to brush, floss and rinse the teeth regularly.

How can Sabka Dentist Help?

Even today there are many people who are scared to visit a dentist. To find the tartar removal cost in India, various factors have to be considered. But at Sabka Dentist cleaning teeth is a simple and painless treatment. Treatment of any dental problem requires a thorough examination.

After that treatment plans are discussed with the patient and after taking their concent the expert will proceed with the treatment. At Sabka Dentist first, a complete examination is performed before the cleaning process. A tartar removal dentist checks the teeth and gums with the help of a mirror and looks out for potential concerns.

The tartar removal dentist, with the help of the sclera and a small mirror, will remove the plaque and tartar that is present between the teeth as well as between teeth and the gums.

During this process, the tartar cleaning dentist will scrape the over the teeth and you will hear the scraping sound. The dentist will brush the teeth with a high-powered electric brush and gritty toothpaste.

Once the tartar I removed brushing and flossing regularly will stop the plaque from building and hardening. Flossing of teeth is an important step, at Sabka dentist the expert will then teach the steps to floss teeth at home.

At Sabka dentist the experts will guide you so that you have the best oral hygiene and fresh breath always.

Can tartar naturally fall off your teeth?

The minerals present in saliva make it a rigid substance. It’s next to impossible to remove tartar manually without the help of a dentist. However, tartar can sometimes eject from a tooth.

Can tartar be removed by brushing?

Once tartar gets stuck to your teeth, it’s next to impossible to remove it. It needs to be professionally scraped off by a dental professional.

The Tartar removal Process may be a little painful, But the discomfort and pain will vanish within a few days.